Tips for Living the Smart Way: A new Revolution in Food and Thinking 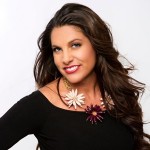 Kathy Smart certainly lives up to her reputation as a triple threat in the health and wellness space. She is a registered holistic nutritionist who wrote she’s the best-selling cook-book Live The Smart Way; a Cordon Blue approved cookcook and Canada’s 2015 Fitness Presenter of the Year (along side her American Counterpart Jillian Michaels). Best known as North America’s Gluten-Free expert she is a popular speaker, health and fitness presenter and the go-to media expert in all things health and wellness.

In 2015, Kathy launched the much-anticipated Live The Smart Way Expo, her personally branded Canada-wide consumer Expo to a rousing success and is now Canada’s Largest Health and Wellness Tradeshow.  She was recently awarded the Leading Women Award by the Canadian Government for raising health awareness across the country and was also named a 2015 Winner of the Top 40 Under 40 Business Achievement Award (Ottawa Business Journal).

Kathy has been featured around the world as the leading expert in Healthy Gluten-Free living and is a Chatelaine Magazine recipe developer. She has been a guest on the Dr. Oz Show, CTV News, Breakfast TV, Global News, The Social, CH Morning Live, Canada AM and countless shows across North America. Kathy was named 2014 Most Amazing Person – CTV Ottawa and Winner of a Top 40 Under 40 Business Achievement Award (Ottawa Business Journal); 2013’s Most Powerful Woman (Next Best Thing Magazine – Sister Publication to Time Magazine); National Health Activist for 2012. She was recently named one of the Top 50 Most Influential Social Media Tweeters according to the Huffington Post.

Active in the community, Kathy has also been a fitness trainer for SpecialOlympics Canada, sits on the panel for Media Action Represent (an organization for healthy women’s images in the media) and sits on the uOBMRI External Board of Directors. She was recently named one of the Top 50 Most Influential Social Media Tweeters according to the Huffington Post.